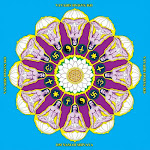 The first posts act as an introduction to this site and each successive entry builds on those that precede; so if this is your first visit to this site, we suggest that you start with the first entry and follow from there. 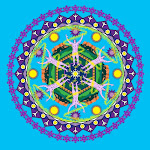 Since childhood I have been fascinated with mandalas. Even before I knew the term or the concept as it is known in the orient, I was attracted to the circular stained glass windows in medieval churches, the rose windows. Perhaps it was part of my Catholic heritage that I later took up stained glass. One of my first pieces was a mandala design.
*******
When I saw my first Tibetan mandala, I was immediately intrigued; but since I am not of that tradition, I have come up with a different approach to the art. Now I look at all my graphic creations as mandalas in the sense of being visual meditations. 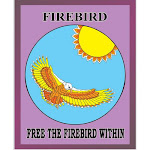 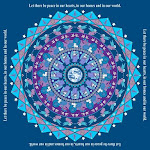 Bob Coyne
For 28 years, I ran a board and care home for chronically mentally ill in Tucson, and really enjoyed the work; but creating art has always been a part of my life. I have worked in various media including oils and acrylics, stained glass, cloth and wood; but I have been concentrating on digital art for the past few years. I have never made my living with art, but I do take it seriously. I don't want to give up my care giving work, but some supplemental income will be helpful. I specialize in designs using flowers of the Arizona desert and think my creations reflect my appreciation for cacti and nature in general. Many of my designs feature mandalas, and I pray that all portray beauty and harmony. In 2012, I moved back to Maine after 31 years in Arizona. I grew up in Maine, and am happy to be back. I will continue to add to my Cactus Hugger designs reflecting the beauty of Arizona, but will be adding designs that come from an appreciation of the beauty of Maine and New England. I am continuing work in care giving, and always like to do gardening wherever I am. I now live in the country and have chickens. I plan to add milking goats and more. 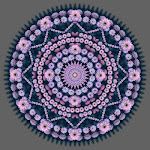 While I reserve all rights to my own designs, I have created many of these designs in outline form which makes them adaptable to other mediums. I have done stained glass in the past and some of these designs could be used for stained glass creations. Tile, quilt and embroidery are other ways these designs could be used. I would be delighted to see them used as such and hereby give permission for that kind of use. I would appreciate getting a picture of your creation.
*******
Some of these designs could also be used for a mural. If you needed more material to make them large enough, I could add more outer rings to enlarge the design. You might suggest elements you would like me to add. While the potential is there to make these designs larger and more elaborate, I have not done so as I am aiming for the images to fit best on prints in the 13"x19" to 23"x34.5" range. I would be happy to go larger if there is a demand.
********
For $5.00, I would burn a disc for you and send you a CD with the design on it.
*******
See also my section on digital coloring books.

List of Mandalas
These mandalas are listed in order of posting, so it easy to view the images. If you go to Nightblooming Cards, you will find a list of texts as well as images that do not fit the mandala category. You can match any image with any text to create a unique design. Just specify what combo you want, and I will be able to fill your order quickly.

The Twelve Faces of Babaji Revised 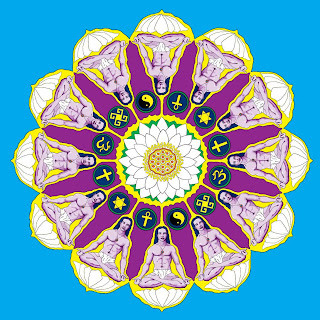 Zazzle has censored my Babaji mandala again, objecting to my use of the ancient symbol of the swastika. I had previously explained to them that the swastika is one of our earliest sacred symbols found in various forms around the world long before the Nazi's perversion of it. I have had Babaji designs on Zazzle since 2008, but they would not relent this time, so I have changed my design. This revised version uses an Aztec symbol which is actually a variation on the swastika, but looks different than the one we are more familiar with. The Navajo and Hopis used one identical to the Scandinavian one, and Buddhists still use it today. The Babaji mandala was my first digital mandala and still my favorite, so it is important to me to keep it available. Those interested in more information will find Wikipedia's article on this symbol fascinating. I think of the swastika, in all its forms, as a cross in motion.
Posted by Bob Coyne at 8:36 PM